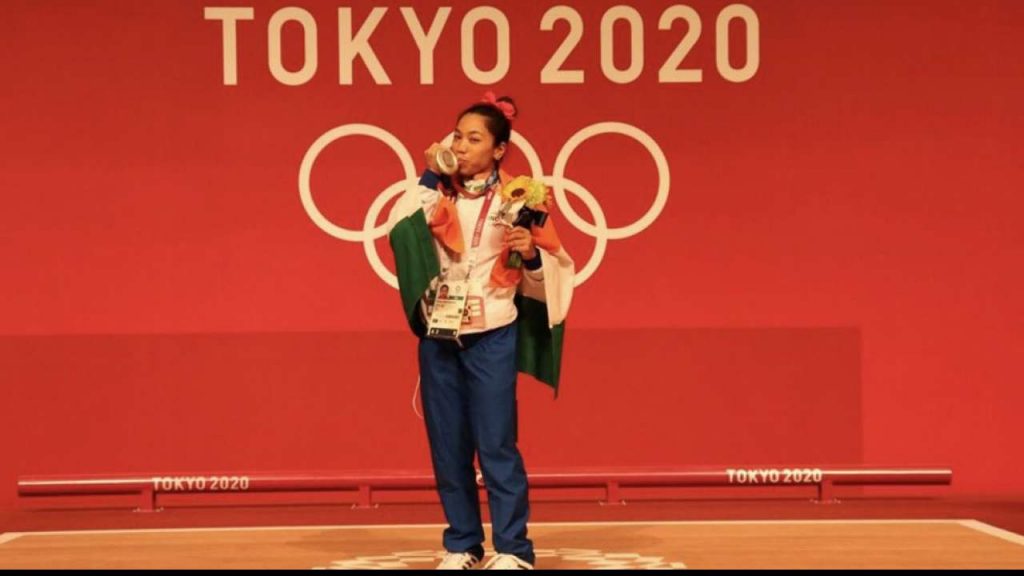 Mirabai Chanu – Our Olympic Champion is back with Silver Medal!

Sports students! We dedicate this blog to you! Read out an exciting and inspirational story of Mirabai Chanu and see how her hard work pays back to her.

Olympic weightlifting silver medalist champ Mirabai Chanu is back at her home from Tokyo. She received a warm welcome at Delhi Airport, Her dedication to weightlifting and love for the nation is the reason for her ultimate win.

Just After her historic 49-kg category win, she said, she wanted to have a tempting pizza as she was on a strict diet for months.

On Tuesday, Mirabai Chanu was seen with Kiren Rijju, Union Minister of Law and Justice, having pizza during an event that was conducted to felicitate our Olympic star.

Imagine the hardship of our Olympic star and how a village girl reaches the Olympics final and gets Silver for our nation. Now, Mirabai is our star, and she deserves the best.

On a sweet note, Rijiju wrote,” Mirabai was withholding her desire to have pizza to maintain her weight for her Olympics game! Now, our champ has the freedom to enjoy her pizza.

The champ expressed her desire to have pizza, and surprisingly, Pizza giant Domino’s give a token of appreciation promised lifetime free pizza to our champion.

After Karnam Malleswari, Mirabai won in Olympics after 21 years in Tokyo. It is undoubtedly a memorable moment for India.

The Painful Night before Mirabai’s win!

What a day when Mirabai was spotted at Indira Gandhi International Airport on Monday, she landed from Japan, with her silver medal and her smiling face behind a face shield and a mask.

Between the innocent waving of her fans and the smile, the airport staff, the weightlifter, fellow travelers understand her pain that was there. How our champ suffered from abdominal cramps a night before the Olympics.

Mirabai words – she said she was tensed and have words with her coach sir about her pain. She said I don’t know why it is happening, so close to my medal match? I was worried about my body. But my focus on my medal.

She said – As athletes, we face such terrible issues and we know how to handle them.

Her coach said – We always wanted to have gold, Mirabai was confident about achieving the gold medal. But her pain resulted in her performance and hit her during the final. That’s why our champ missed two lifts ( 89 Kg in snatch and 117 Kg in clean and jerk. It is nothing new. The female athletes suffer from disturbed menstrual cycles due to heavy workouts, anxiety, and training sessions.

Her unforgettable journey and her performance let her set a record. she took the silver medal by lifting 202 Kg, 115 Kg in clean and jerk, and 87 Kg in snatch.

Finally, our champ is back at Manipur, her homeplace, and rewarded with:

This is what we called ultimate winning! We are proud to have Mirabai Chanu as our champion.

What do you learn from Chanu’s life?

No matter what, you belong to a rich family or a small village. if you have the willingness to prove yourself, one day you will hold a medal for your country.

Yes, our champion got silver for our Nation! So, you can be the next one, chase your dreams, believe in yourself and you will be the next Olympic Champion!

You have the power to build your destiny! Keep up the Sportsman spirit, make your career in sports and get appreciation.

All the best sports students!