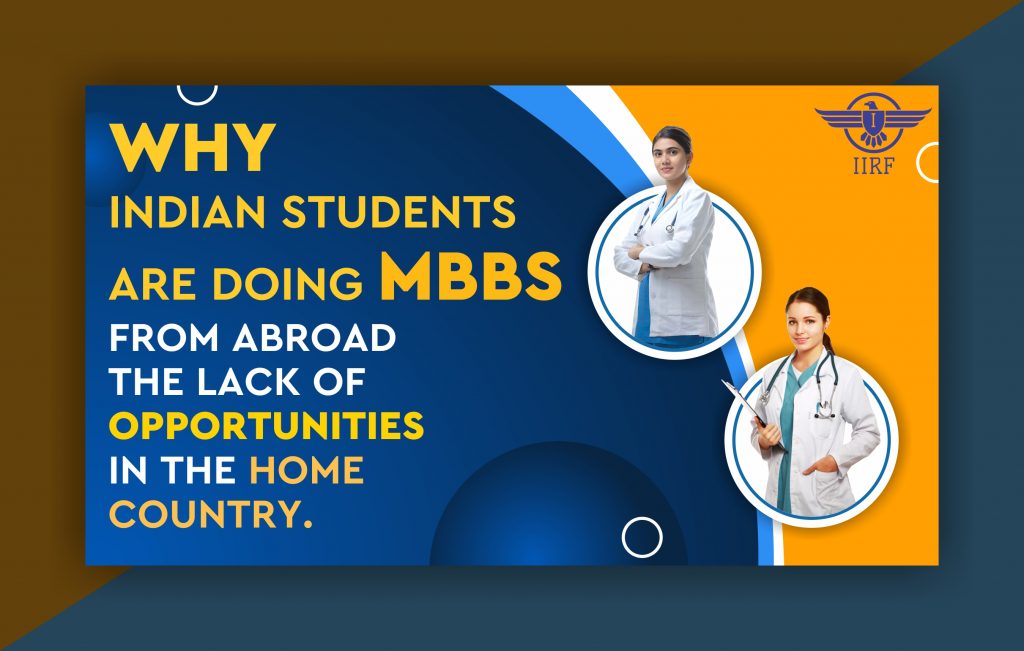 Why Indian Students are doing MBBS from Abroad: The lack of opportunities in the home country

MBBS is the dream of lakhs of aspirants! Every year students give their best to get a seat in the best medical college in India, but only a few of them achieve their target. This is the reason, our Indian students are going abroad to accomplish their dreams of becoming a Doctor. According to recent statistics, 8.70 lakh candidates have cleared NEET-UG last year (2021), but only 88,120 students got admission in UG, as India has limited MBBS seats.

Yes, thousands of Indian students take medical education from China, Ukraine, Russia, Georgia, and The Philippines. These countries have emerged as the major talking points for medical students and have gained popularity in recent years. But this time due to the Russia-Ukraine war, many Indian students were stuck in Ukraine and waiting to get back to their home country. Thankfully, the Indian government has accomplished its mission and gotten its children back in the country.

The words of Indian Prime Minister, Shri Narendra Modi: He alluded to the phenomenon and said: our students are shifting to “small countries” for studies, especially in the medical field. In his inauguration of a webinar related to some Union Budget announcements in the health and medical sector, PM urged the private sector to take some initiatives and do something in the medical education field in a big way.

The Prime Minister has not straightway said about Ukraine in particular, the country that is facing problems and under attack from Russia. Ukraine ranks fourth in Europe, for being one of the largest countries to give graduate and postgraduate degrees to medical students, these are the words said by Ukraine’s Ministry of Education and Science.

Before evacuation efforts began in Ukraine, there were almost 18,095 Indian students. These students were pursuing medical education from Ukraine. According to IANS, 24% of the overseas students, 24% of students are from India. The present situation is worse! Students who are stranded in Ukraine, and those who have come back, both have uncertain futures and are dealing with problems.

According to the experts, the reason why medical students go abroad is? There is a shortage of medical seats in India. And in comparison to India, Ukraine has affordable fees.

Now, on returning to their home country, students would still need to clear FMGE ( Foreign Medical Graduate Exam) to get a license to begin their practice in India. Soon, FMGE will be replaced with the exam, known as NExT ( National Exit Test). Also, this exam will replace the NEET-PG exam and will become an essential exam for the MBBS final year students.

After the Ukraine crisis, Union Parliamentary Affairs Minister Pralahad Joshi said that 90% of our students, who study abroad, do not qualify for the Indian examinations. This statement was harshly slammed by PMSF ( Progressive Medicos and Scientists Forum ( PMSF). PMSF said it is inappropriate and insensitive to ask such questions to students who have already faced the horrors of war in Ukraine. It depends on the private sector, how will they deal with the situation? How will they initiate to get more medical seats for the students? In the words of Narendra Modi Ji: PM urged the private sector to take some initiatives and do something in the medical education field in a big way.